The Commons building is up and running. This blog remains active for archival information. For current projects, photos, and details, visit sites.harleyschool.org/thecommons

The Commons is open! 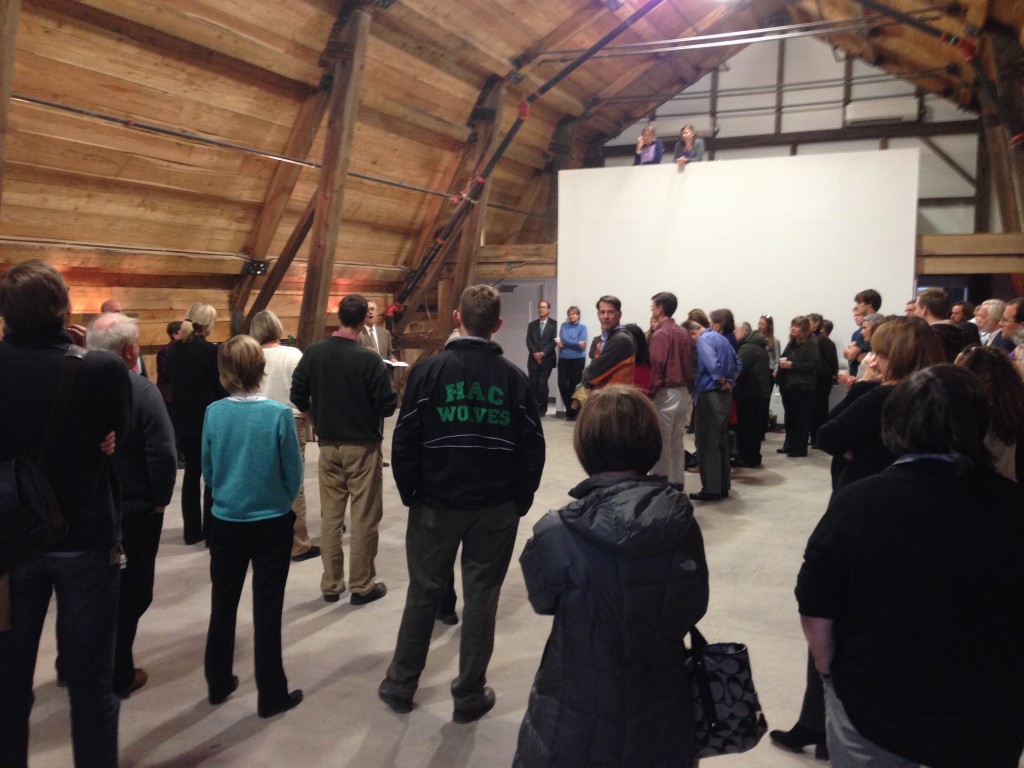 Faculty and staff gathered for a celebratory gathering and informal dedication in November. 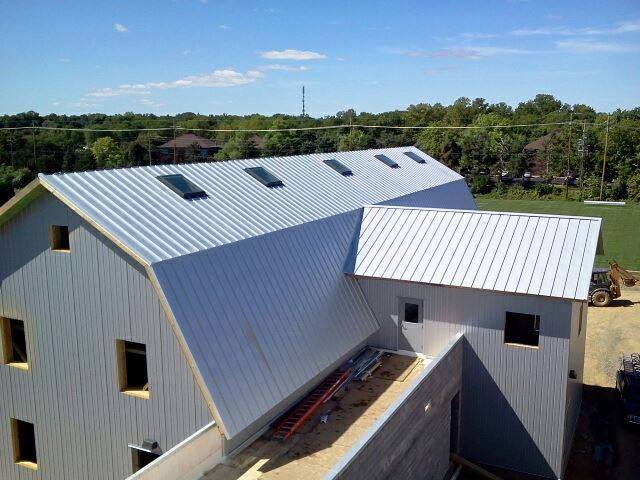 an early September view from a boom, 85 feet in the air. 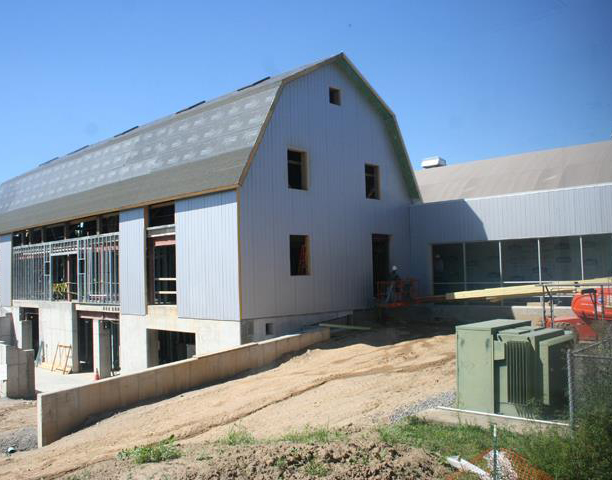 The construction of The Commons is coming along. That’s the new Flag Hall connecting to Beckerman on the right. 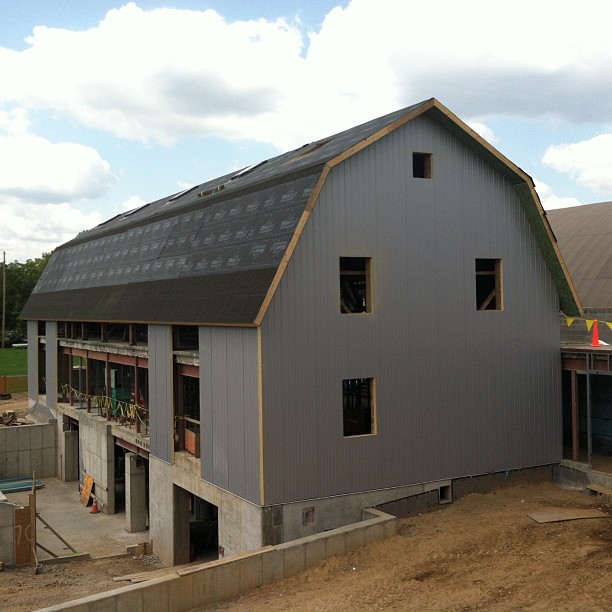 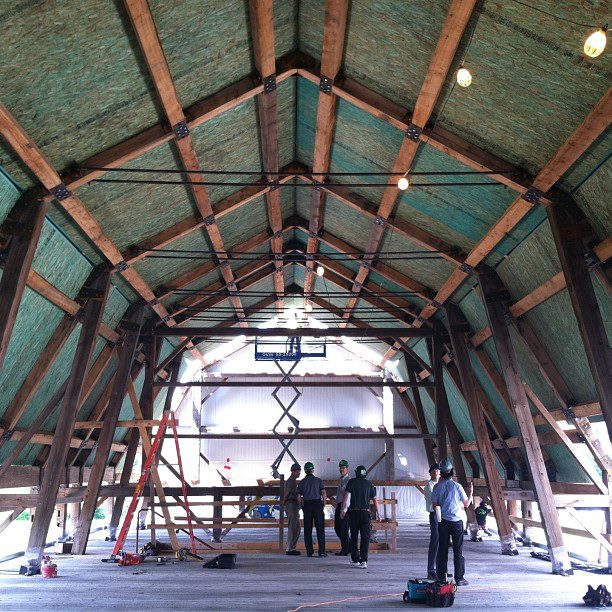 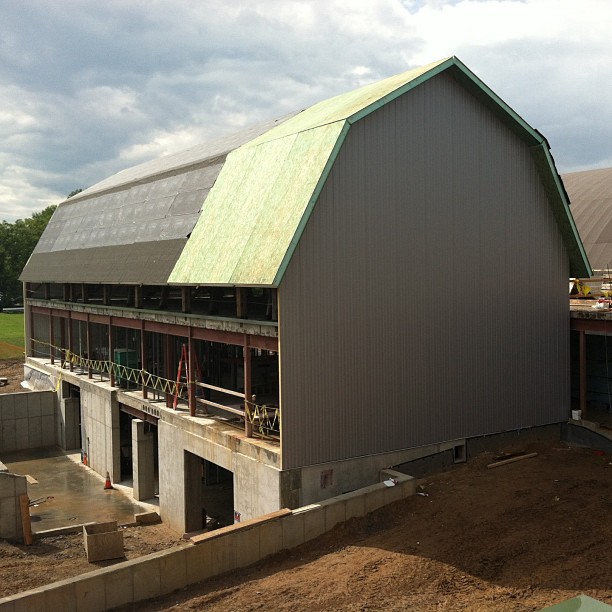 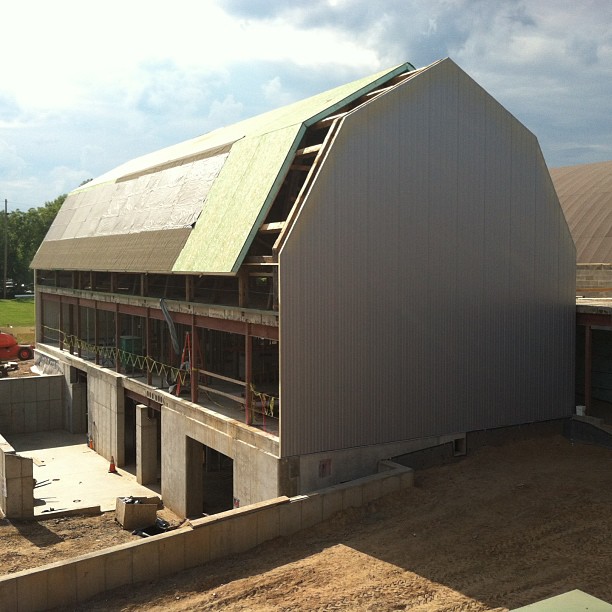 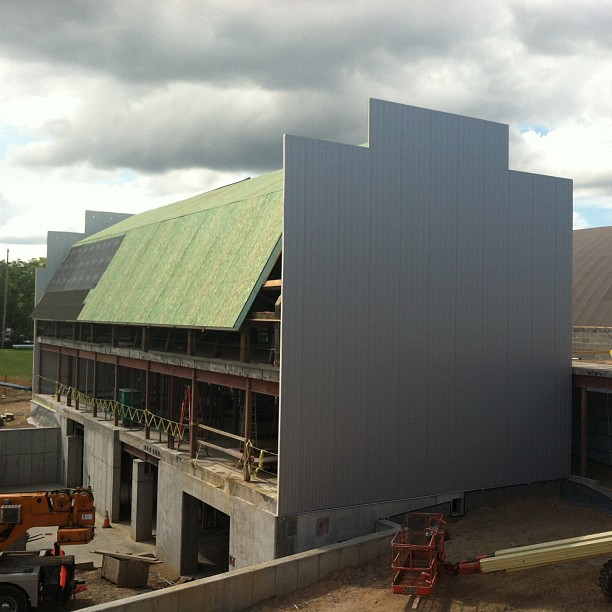 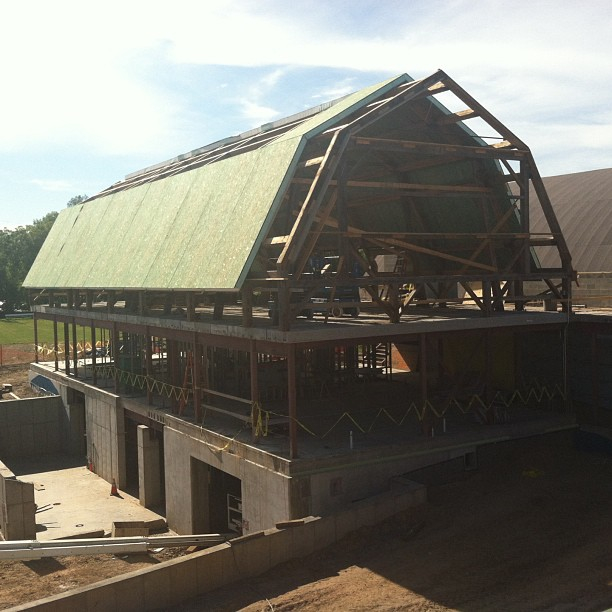 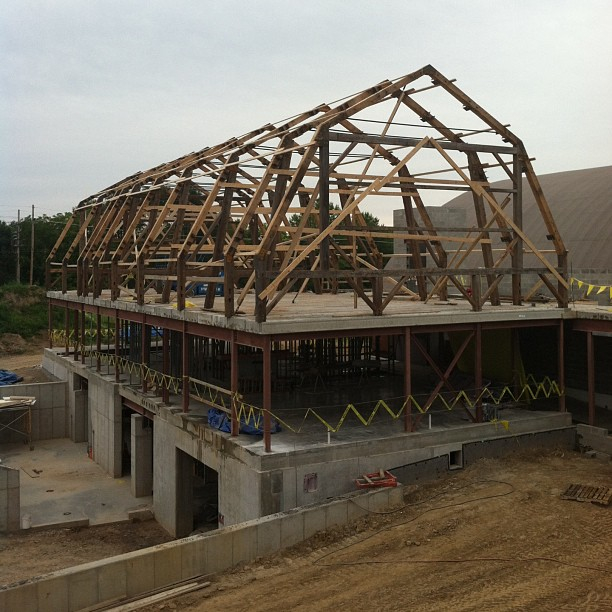 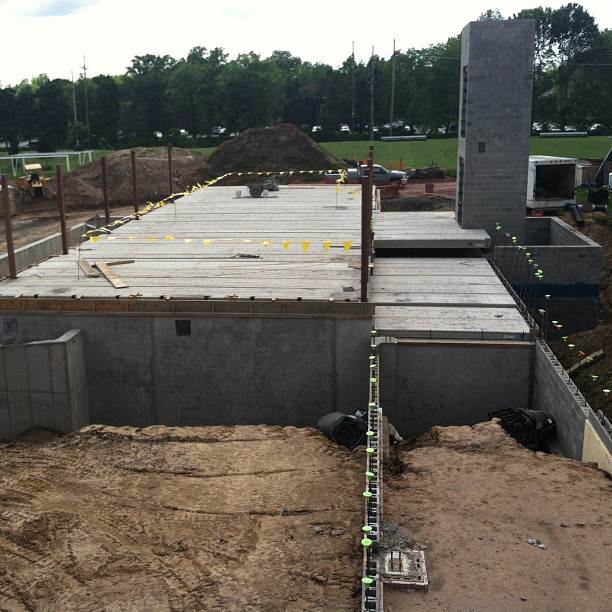 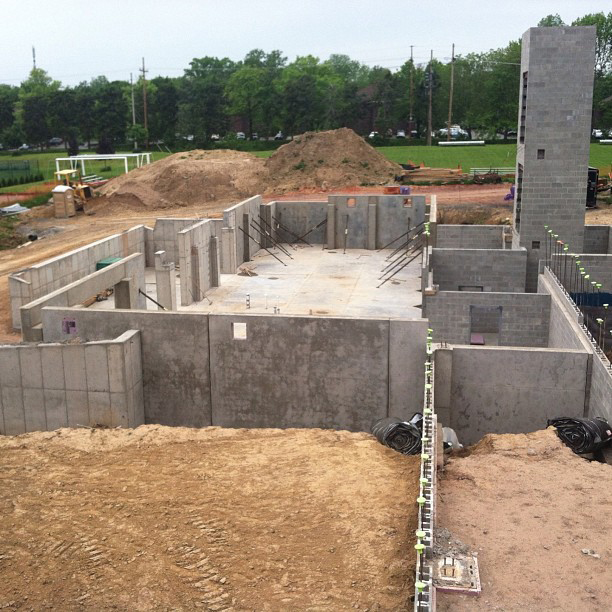 Take a look at this short time lapse taken this week. 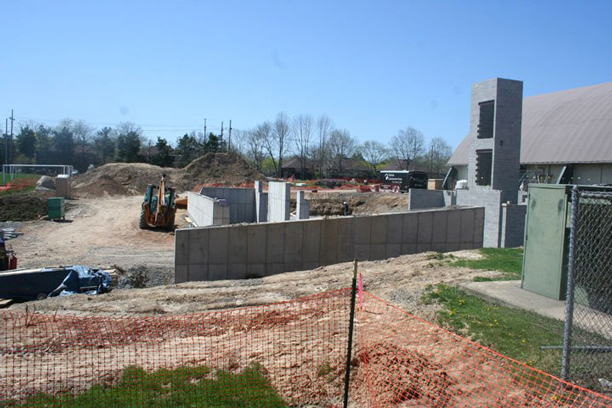 The elevator shaft has been completed and the final touches have been worked through to finish the block walls that form much of the basement. The crew has worked to finish off those projects as well as burying all the pipes and wires that will go under the floor of the basement. All this has been done so that they can take the next big step: pouring the ground level concrete floor, the basement project space. Everything that needs to happen first has been finished off and this week the floor goes in. Once that is in place, the remaining basement walls get set-up on the new floor and then lifted into place. We are a couple weeks behind schedule on The Commons, but once the remaining basement walls are in place things will start moving right along. There is a good chance we can make up some lost time if the weather cooperates! 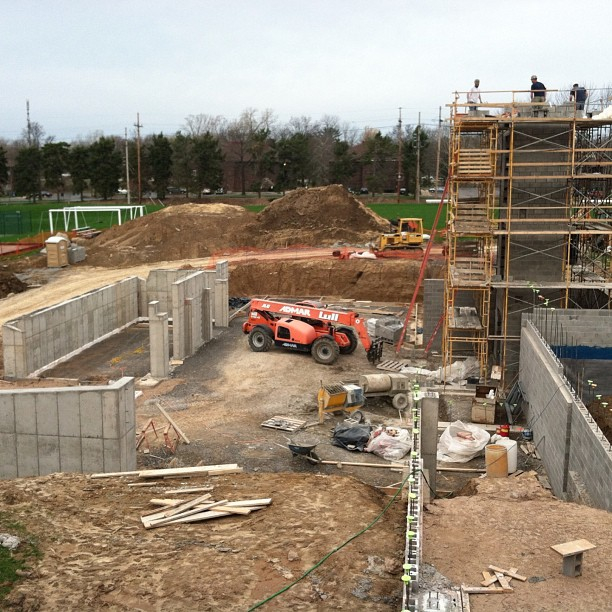 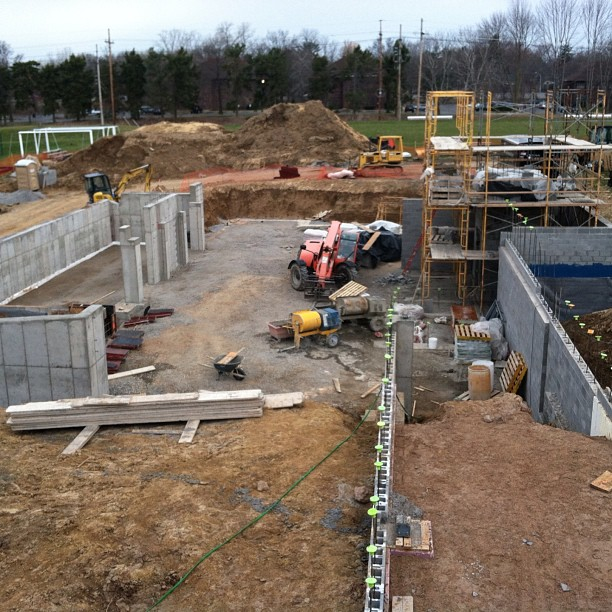 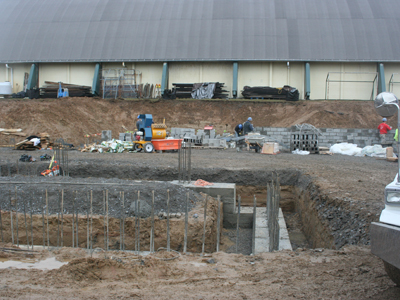 walls under the greenhouse

For many days now the crew has been getting set up for the BIG POUR! The concrete walls that form the bottom section of the greenhouse are made from scratch right on site. Unlike the concrete block walls that were built last week, where the walls were made by stacking the blocks on one another and then filling them with concrete, these walls will be made using molds. Last week the crew spent a lot of time setting all the re-bar (the metal bars that will be inside the concrete to give it strength) in place. They make the re-bar into a grid or cage so that there is a lot of support inside the concrete. Then they put the forms up along either side of the rebar. These forms hold the concrete in the shape of a wall while it hardens. Yesterday the concrete came and was poured into the molds. After a day or two to harden … the forms will be taken back down and … presto, new walls! 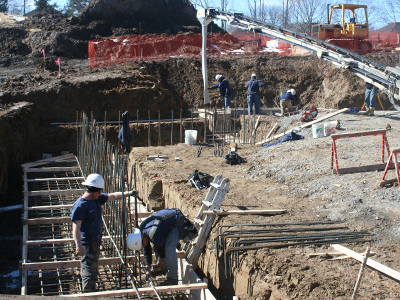 You have likely seen the crater they dug for The Commons, a huge whole in which to begin building the Commons up! The footers for The Commons have been the project the last few days. This is a huge step forward because when these are done, the crew out there will have a hard, level surface, the exact shape of the building footprint, to build up from. This means things can start to really move along. The crew has used a tremendous amount of math and geometry to calculate how and where to build the footers. The footers need to be exactly in the right spot. Exactly the right depth. Exactly the right distance from the school, exactly the right distance from the field house. And every angle needs to be perfectly square. It is like working in a giant Euclidian grid, all three axes in action!

The construction continued right through break! On the footers that were poured before break, the foundation walls for the new Flag Hall, connecting Beckerman Center to The Commons, have been built … cinder block by cinder block. Just yesterday the last of the concrete was poured that fills those cinder blocks, solidifying them as one wall unit. Because there is no basement under the Flag Hall, the dirt is being filled back in around the foundation walls and eventually gravel and a concrete floor will be poured on top of that. It almost looks like a hallway already! Beginning very soon will be the digging of the foundation for The Commons.

Great views from Beckerman of the digging that just started again for the foundations for the new Flag Hall. The crews are pouring the footers, the wider concrete parts at the base of the thinner concrete foundation walls, and leaving the re-bar (metal rods) sticking out the top. This re-bar will end up buried within the next pour of concrete when they make the foundation walls, connecting it all together. The crew is working from the school out, like mopping a floor they have to work in a way that they don’t block themselves in! 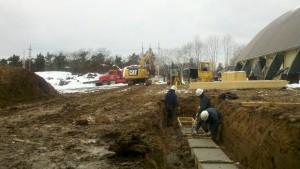 Factoid: Concrete does not DRY it HARDENS. Unlike clay or most glue, concrete does not dry out in order to get hard, it actually goes through a chemical reaction and hardens. Did you know that concrete can be poured under water, and it will still harden! It also makes its own heat while it hardens, it is an exothermic reaction. The water causes the hardening of concrete through a process called hydration. Hydration is a chemical reaction in which the major compounds in cement form chemical bonds with water molecules and become hydrates or hydration products.

The equation for the hydration of tricalcium silicate (cement) is given by:

So why has all the digging stopped?

The tricky thing about construction during the winter is the weather! Sometimes the biggest issue can be temperature. When the main activity involves using heavy equipment that runs on big diesel engines, things come to a stop when the temperature gets too cold.

Diesel engines, like all combustion engines, get their energy by burning fuel. Typical gas engines use a spark plug to create an electrical spark to ignite the fuel. Diesel engines don’t use a spark, they use the heat created by pressure. A diesel engine compresses the fuel and air until it gets so hot that it ignites on its own.

If it is too cold outside, the diesel engines can’t get the compressed fuel (inside all that cold metal) to get hot enough to burn well. They could make it happen with a lot of effort, but it’s hard to have people work outside all day when it is this cold anyway! 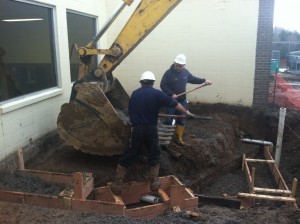 We had a visit from Roto-Rooter the other day! It’s a company that works on plumbing, pipes and drains. Even though none of the new pipes for the Commons have been installed yet, there are old pipes buried in the ground that are part of the existing school buildings. In this picture, you can see Schifty standing above a big hole by the stairs leading from Beckerman into the Field House. At the bottom of that hole are some pipes and basins associated with part of the filtering system for the Harley Pool that haven’t seen the light of day in over 40 years! Also note the small dig next to Beckerman. We had a drainage problem with the pool backflow and asked the construction workers to check it out when digging the footers for the new hallway. They discovered an old septic tank used to filter the pool waste water. It needed to be fixed and moved since it was in the way of the footers. It’s typical to find something unexpected!

A visit and a surprise from Roto-Rooter 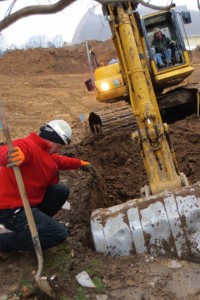 Using hand signals to communicate with the machine operator to help get the shovel into the right spot.

The excavation and grading is finished for the rain garden and general site plan. Now begins the deep digging for the building foundations. The digging starts close to Beckerman where the new Flag Hall will exit Beckerman and head to the Commons. In addition to the foundation, all the utilities (electricity, water, sewer, data, etc.) will be underground and will go from the school to the Commons. The foundation will be insulated concrete and will support the weight of the buildings and keep it stable and free of any movement. Because the ground actually moves as it freezes and thaws each winter and spring, building foundations need to go below the “frost line” in order to be secured to the ground where it never freezes. In our area, building codes mandate that foundations are at least four feet below the surface (below grade, as they say) because the ground can freeze as deep as 40 inches on cold winters. Why do you think the ground moves as it freezes and thaws?

How does that guy know how much more to dig?

Did you see the track hoe digging more in the rain garden yesterday? They were looking for some of the pipes running out of the storm drain near the steps leading to the tennis courts. As skilled as the operator of the machine might be, he can’t do it without help. Notice the man near the “business end” of the track hoe. He’s using hand signals to communicate with machine operator to help get the shovel into the right spot, or to stop him from hitting the wrong spot. Why do you think he uses hand signals to talk to the operator?

The Rain Garden takes shape and dirt is flying! You can really see the shape of the land being formed out there, and the way the water will flow. Lots of ideas about what we can do with all of this dirt on site before we truck too much of it away: Rolling hills in the middle and/or lower school playground, sledding hill designed by the 3rd grade, a hill to view soccer games from… Keep the ideas coming, we won’t be able to do some of them… but you never know what might end up being the perfect idea for the school to get behind!

Question: An estimated 300 cubic yards of soil has been dug and piled up in two days. If soil has an average density of 100 cubic pounds per cubic foot, how many pounds of soil have we moved? 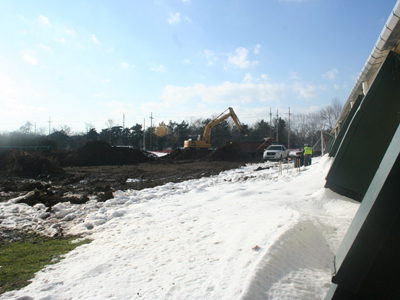 This week is the beginning of the excavation—the digging up of the earth where the foundation /basement goes.  The first thing the crew does is “scrape” all the topsoil off with a bulldozer. This topsoil is the best of soils, rich with organic matter. The topsoil wll be piled to the side and saved so that it can be spread out again over the ground once the building is in place. With the topsoil out of the way, the deep digging will begin. They will start right next to Beckerman where the new hallway will be and dig their way out from there.

Factoid: The topsoil in this area is generally from 4 to 8 inches deep. Under the topsoil at Harley is a lot of very clay-rich soils, dense and hard stuff. The topsoil is the accumulation of composted organic matter over thousands of years.