The Project Space has seen some great activities and planned events, but sometimes the best use of the space is when it is spontaneous. If you want to know what spontaneous means, just look up Dan O’Brien in the dictionary. Mr. O’Brien (the math one) took his 7th Grade Pre-Algebra class into the Project Space to expand his lesson on ratios and proportions, with a little electricity thrown in to keep it exciting. To get a better idea of what the class pursued, just read what Dan wrote in summary below:

“I used the Project Space in the Commons today for 7th grade Pre-Algebra.  We are studying ratios and proportions.  Today, in my classroom, I had two recipes – one for salty conductive playdough and one for sugary insular playdough.  I gave the class both recipes, but assigned a new amount for one of the ingredients for each student pair.  For example, the salty recipe calls for one-fourth of a cup of oil, and I told one group that they now had to use one-third of a cup of oil.  Their job was to use proportions and algebra to determine the amounts of all the other ingredients.  This took about 10 minutes.  The whole class then went to the project space and assembled the ingredients based on their (hopefully) accurate and proportional recipes.  It was messy, loud, and fun.  I definitely needed the space outside my room.  We made the two playdoughs and experimented to see if the salty playdough was conductive.  We only had time to do it once, but we had two piles of the dough with leads from a battery pack going into each pile.  We connected the two piles with an LED light . . .and it lit up!  There were many Oohs and Aahs.  We made a circuit!  We pushed the piles together and the light went out – a short circuit!  We may explore playdough circuitry a bit more in the next class.”

Another great use of the multi-purpose space in the basement of the Commons. Thanks for sharing, Dan and 7th Grade students! 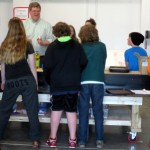 Students look over the recipes and examine ingredients 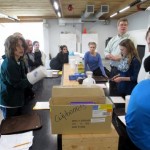 Told to base their new recipe on the quantity of one ingredient each group is assigned, they all must use proportions to convert their recipes 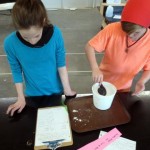 One measuring while the other calculates 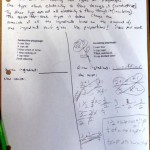 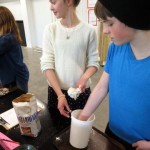 They’re using sugar, so theirs will…..insulate!

Cream of Tartar–it isn’t just for snickerdoodles any more 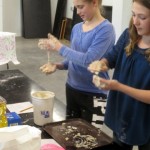 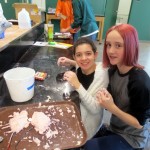