Even though this excellent design-thinking project wasn’t completed in the Commons, it fully and entirely embraces many of the goals we have for how the students will collaborate, think outside the box, prototype/test/re-built/re-test, and offer feedback on each others’ work. With just enough guidance from Jim Tiffin to get started, the fourth grade students designed creative video games using the Scratch program. This is a great example of inter-disciplinary learning which meaningfully reviews past content. Back in the fall, the Fourth Grade studied biographies, and they selected scientists to study whose areas of research/science would inform the fourth graders’ Science Fair projects. Now, three months after the Science Fair, the students have been asked to create computer games using Scratch (entry-level programming software) based on their biography scientists.

An example of the scientist-inspired video games can be seen here: Quinn’s Scratch Game

After creating and testing their video games, the students then built arcades for each computer game from found and recycled materials. 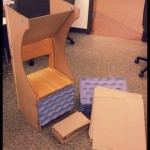 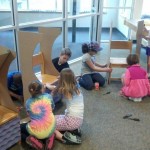 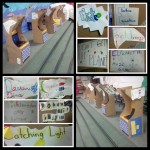 As an avid communicator who eagerly and deliberately shares student work with the broader education community, Mr. Tiffin (@JimTiffinJr) tweeted out many photos and updates on this great project. His tweets of the fourth graders’ work were re-tweeted all over the world, including by the makers of the Scratch program, who then shared them with their thousands of followers. Several people picked up the story, in particular a teacher in Texas who blogged about it with rave reviews. You can learn more about this by following the links below:

Congratulations to the fourth graders and Mr. Tiffin! This is a great example of fostering 21st Century skills in our students, and giving them the reins to their own boundless learning!