Jan 24, 2015 / 0 Comment
The geothermal system that is installed between the Commons and the Field House is used primarily to heat the greenhouse. The basic premise and purpose of the system is that the liquid which is circulated from the greenhouse through the deep piping and wells in the ground will be cooled by the Earth, thereby releasing heat, which can then be captured and sent back to the greenhouse. It is much more elaborate and elegant than that, but as a closed system, the consistent temperature of the ground (up to 100 feet down) is used to facilitate heat transfer; hot liquid returning in the winter and cool liquid returning in the summer.
This is all well and good until it stops working, which is the current situation we are facing. In the fall, there was little demand on the geothermal system since the days were moderate and the temperature in the greenhouse was stable in relation to the outside temperatures. It was not until the weather turned colder did we realize that something was not working. The geothermal system was not kicking in as we expected, and we had to resort to solely using the HVAC system to heat the large and open greenhouse space. The beauty of the geothermal system is that a little can go a long way. That is, the floor of the greenhouse is a large thermal mass which, once heated, retains that heat for up to three or four days. Without this thermal mass foundation providing radiant heat, the greenhouse had to be heated by much less efficient means (albeit more efficient than most with the VRF system).
Thankfully, all of the systems are still covered by warranty, so we called up the Nichols Team to come check it out. It was determined that there was a possible leak in the piping and wells beyond the footprint of the Commons. This meant digging up the ground to physically see where the damage might be. This proves challenging in January when the ground is frozen. Regardless of that, however, the valiant crew broke ground and has now begun the exploration. At this point, Nichols has determined that there is a leak in one of the deep wells. They have contacted the manufacturer and will hopefully begin repair work this coming week. 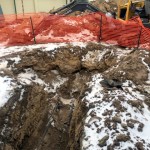 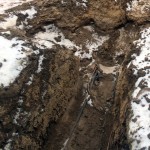 As we can learn from any situation–good or bad–, we now have several questions which we intend to pursue: