As the final presenter in this year’s Commons Speaker Series, John Voelcker (class of 1977) is a prime example of a Harley graduate leading a life of great purpose, at the cutting edge of innovation and necessary change. In his role as editor at High Gear Media’s www.greencarreports.com, John researches, test drives, explores and shares his expert opinion on the latest and greatest in hybrid, electric, and hydrogen fuel cell cars. While he may describe what he does as “I get to drive cars for a living!”, according to his bio on the High Gear Media website, “John is Senior Editor for High Gear Media. In addition to news coverage and new car reviews, John creates and oversees all editorial for High Gear’s green site Green Car Reports. John has covered advanced auto technologies and energy policy for various print, online, and radio outlets, including Wired, Popular Science, Tech Review, IEEE Spectrum, HybridCars.com, and Portfolio.com. He is a regular guest on Fox Car Report Live, and provides occasional car commentary for National Public Radio shows and Sirius Satellite Radio. In 2011, he was elected to the Board of Directors of the International Motor Press Association. He is also part of the screening committee for World Green Car of the Year. Voelcker has driven plug-in cars from more than a dozen automakers, and alt-fuel vehicles from almost as many. He has held editorial jobs at many magazines, including This Old House, Metropolis, Psychology Today, Exposure, Mother Earth News, Budget Living, and IEEE Spectrum. John received a BS in Industrial Engineering from Stanford University and splits his time among the Catskill Mountains, New York City, and the San Francisco Bay Area. He still has hopes of one day becoming an international man of mystery.”

His arrival in town for Reunion Weekend provided the perfect opportunity for him to share his work and experience with the eager audience yesterday afternoon. Before his presentation, John was interviewed by Katrina Irwin, a freelance reporter and anchor for Channel 8 WROC for their “Go Green” feature for this coming week (view the segment here). To give a context to his talk, John started with the history of the automobile. In the early 1900s, cars had either electric (the preferred choice), steam (45 minutes to warm up), or gasoline (crank-based start=unsafe) engines. Ultimately, the gasoline engine prevailed and by the 1920s, one out of every two cars was a Ford Model T. Americans learned that they could travel greater distances with their cars, and as a result, we built the suburban culture we now live where nearly everyone is dependent on a personal car.

In the time between 1950s-1980s, automotive regulations started to appear: headlights, emissions, safety, fuel economy, and then speed limits. Now, the auto industry is driven primarily by the need to meet the many regulations that have been established. Innovations in developing more environmentally-friendly cars have surfaced in response to these regulations, and car companies receive significant incentives now to pursue low and zero-emission vehicles. Toyota is the current leader in hybrid production, accounting for 60% of the 8 million hybrids on the road today. In quantity, the United States has the most hybrid cars, although Japan wins for highest percentage of population owning hybrids. In the United States, California is the leader in “green car” imports and purchases.

Hybrids like the Toyota Prius run primarily on their gasoline engines, but store otherwise wasted energy in a battery, which powers an electric motor to assist the engine, saving engine and cutting emissions. Then there are plug-in hybrids, like the Chevrolet Volt, which can travel both on battery power alone and using their gasoline engine. Depending on their battery size, many of them can do half their total miles–or more–using electricity from the grid to recharge their batteries, rather than burning gasoline. Volt drivers report that 80% of their travel is accomplished without ever needing to access the gas-powered part of their car.

The advent of the zero-emission vehicle has been recent. In December 2010, both Chevrolet and Nissan introduced their fully-electric cars: the Volt and Leaf, respectively. For car owners, there are three things to consider when pursuing low and zero-emission vehicles: range, convenience, and cost of fuel. According to John, most people drive less than they say they do, but the safety and security of knowing that your car can take you someplace in an emergency, if needed, still impacts their decisions. If the range of an average electric car is 60-80 miles between charging, that still leaves doubt in the minds of some people about whether that is sufficient. John also mentioned that most families are two-car families. This could allow most families to have one electric to run the short errands and daily commutes, while still having a gas-fueled car for longer trips and peace of mind. In terms of cost of fuel, if gasoline is around $3/gallon, then electricity averages around $.12/kWh. Refueling an electric car costs 1/5 of what it is to refuel a gasoline-powered car.

Other car companies are now building fully-electric cars: BMW (the i3 and i8), Toyota (electric Prius), Kia (Soul), and Tesla. John went into great detail about Tesla and their monumental arrival on the automotive scene. While still incredibly expensive by standard measures, the Tesla cars have incredible range (about 240 miles between charging), and Tesla is tackling the infrastructure of building charging stations across the United States, offering their customers free energy for the life of their car. Tesla has positioned themselves to be more appealing and sought-after than most of the European luxury cars. The Tesla P85D has been the “cool car” for the past three years. However, another revolution may be taking place. General Motors has promised to release an electric car in the near future which will have a range of 200 miles.

John also addressed cars with hydrogen fuel cells. These cars are powered by hydrogen, which has incredible energy potential, pumped into stacked fuel cells, which when combined with oxygen, produces energy and waste water which is released out the tail pipe. Rather than waiting 30 minutes to charge an electric battery for 80 miles of distance, the hydrogen-fueled cars give the driver 300 miles of range in less than 10 minutes of refueling. Two examples of these cars are the Toyota Mirai and the Hyundai Tucson. The difficulty in this scenario is that hydrogen stations just don’t exist. In Southern California, there are 14 hydrogen fueling stations, but they cost over $1 million to build. John predicts that there will be 100 stations by 2020, but that hydrogen fuel will cost equivalent to what gasoline costs now per gallon.

The final part of John’s presentation addressed autonomous cars like the Mercedes-Benz F 015.  Adaptive cruise control, blind-spot information, lane departure warning and lane departure correction are all technologies available in automotive production today. While it takes the average human 8 seconds to respond to what they see on the road (if their attention has been elsewhere), it only takes an environment-sensing car 1.5 seconds. While there are still many “human-based” factors to sort out (e.g., who goes first at a 4-way stop intersection), and weather is a big factor in vision-based input devices, John sees at least some element of autonomous driving arriving soon.

Many of the audience members asked questions about the true “sustainable” nature of the green cars in general, wondering whether overall greenhouse gas reduction was possible. Even if emissions are eliminated from the tail pipe of the cars, doesn’t it increase the output from coal-based electricity plants? According to John, it is still better to drive an electronic vehicle, but it depends on the “cleanliness” of the local regional grid. He shared the Wells to Wheels carbon emissions equivalency map from the Union of Concerned Scientists which shows that as renewable energy increases and start to replace coal, then electricity use will be greener overall. Other questions centered around how old batteries were managed by the car companies. John shared that over 90% of the starter batteries are recycled currently, and all car makers have programs to take back their used car batteries. He also noted that there is a very active secondary life for electric car batteries, as they can store solar power and be used in homes for that purpose. 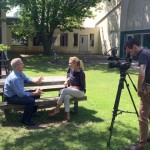 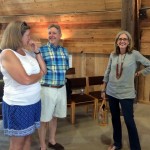 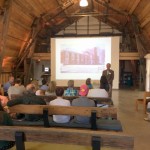 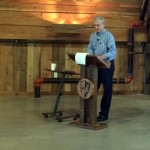 Starting off with this history of the car 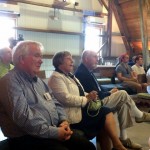 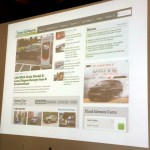 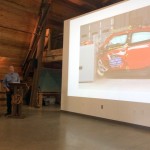 The introduction of safety regulations 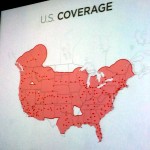 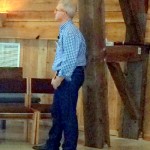 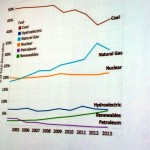 The configuration of our current power grid 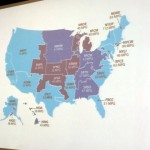 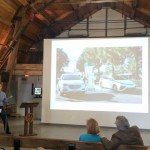 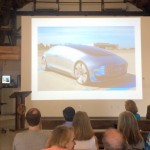 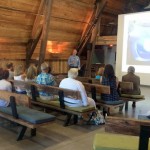 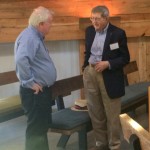 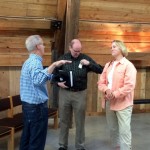 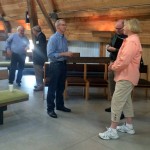