This year’s Middle School musical production is James and the Giant Peach, a Roald Dahl classic story. Under theatrical direction of Linda Foster, with musical direction from Kristy Houston, and additional support from Tracey Linder, the cast and crew are hard at work preparing their show. Since the Upper School musical comes first in the calendar this year, they are using the Theater, so the middle school students have started their conceptual and blocking work in the BCCE! Thanks to Art Rothfuss for digitally capturing some of the active moments during rehearsals!

An additional treat this year is the collaboration with PUSH Physical Theatre and Miss Heather Stevenson. You can read all about the process, thanks to guest blogger, seventh grader Margot Hilyard:

Today the insects and Mrs. Houston (our musical director) are working through the script on songs and music. We’re getting through them faster than I expected, probably due to the small group today. Everyone is still in the process of working out comfortable ranges to sing in but the songs are flexible enough to work everything in.

Today is a full cast rehearsal. Everyone is crammed in the barn. We’re all still learning the songs and working through them slowly. Things are starting to come together and it’s still being worked on.

This is the first day of  movement rehearsal. Ms. Heather of PUSH Theater will be working with the group! It seems like the cast is excited for an active rehearsal. I think it will make everyone a bit more awake after the long day. I see that everyone’s dressed in comfy clothes for the fun! Ms. Heather will be working with the cast on Tuesdays and Thursdays with choreography and movement. On the website for Push Physical Theatre (that you can visit here: http://www.pushtheatre.org/about.html) you can read about her and the company.

After a small battle with the chairs and benches, we’re ready to begin. Right off the bat we have all become trees. Ms. Heather told us about the importance of transitions,  how they can be just as interesting as the main motion. We’re also having some fun with weight towards the center and weight away from the center. This is a fun technique that almost feels like a trust fall, using each others’ weight to balance. It’s interesting to watch and see what people come up with. I can see a group of eight or nine people all supporting each others’ weight. We ended rehearsal with each group showing off with what they practiced.

We were working with Miss Heather again today in the barn. The cast was split up into their separate groups and were working on different skills. We were mostly working on parts of the larger scenes. The group came together for a bit to work on music, but was mostly working with the movement. There was also a bit of dancing. It’s great that there’s time in between working to take breaks and do homework. I think this is really helpful in managing time for busy students. The rehearsals are more relaxed than I had thought, but everyone seems excited to keep working. A lot of progress has been made in just the past week and I’m excited to see how things turn out.

It’s a mixup of singing, scene work, blocking, and dancing today. We all get to hang out in the theater, which is great because there is so much more room to spread out. It’s also a good start on getting used to how different everything sounds in here. Ms. Heather’s here helping with various scenes. Four of the fifth and sixth graders are here today and it’s nice to see them learning from the older kids who have been in the play before. It seems like most people who have gone through the play process before have come back.

The process of getting the tech crew onboard with the musical has begun! There are already names on the signup sheet in the middle school hallway.

Back on track with rehearsal today, everyone has been working on the movement involved with the musical. Ms. Heather has become a regular part of Tuesday/Thursday practice. The focus has started to be more on the dances that accompany the songs rather than the physicality. I think we could have gone on with that a bit longer, but learning the dances earlier gives more time to practice. It’s fun to watch, too! The music and dancing are coming together and the cast is starting to work with Ms. Heather on experimenting with the moves. Its great to see everything falling into place! 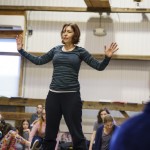 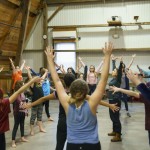 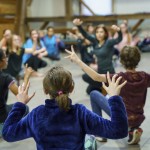 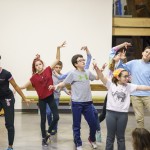 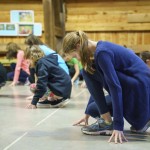 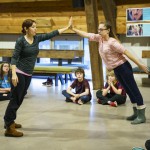 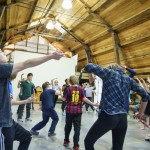 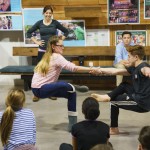