We celebrated cross-generational learning today when the Fiddlers of the Genesee came to Harley to play a side-by-side outreach workshop with our 7th and 8th Grade String Ensemble. Kelly Schroeder, our string teacher and avid fiddler, has been dedicating a portion of her rehearsal time to having the students learn and play traditional folk tunes and classic fiddle tunes by ear and by reading music. This repertoire is rich in history and cultural meaning, especially in this part of the world where tunes have been passed down from generation to generation.

Sara Hartman, past Harley parent and current Harley grandparent, plays with the group and had played in on some of our Harriet Bentley String Band sessions earlier in the year. As a board member of Fiddlers of the Genesee (FOG), she knew part of that group’s mission was to reach out and foster a love of this traditional music with young people in our area. They spent the morning orchestra rehearsal doing just that. According to Kelly, the students learned:

1. Tater or Potato intro (what I would call kick-off)

2. Old Joe Clark in A mixolydian

3. Cellist learned to read chords and either play a shuffle or what I call “off beat” rhythm

4. Sawing Off (another intro term)

5. History of each song

The photos capture to true side-by-side nature of the event, and how our students were happily thrown right into the heart of making music. They did great! A few videos are below, as well. The first is of the FOG cellist explaining how the cellos use their rhythm to keep the baseline interesting, and then the kids playing it. The second is a beautiful tune you might recognize from Ken Burn’s film series on the Civil War. Our kids were sight reading it! We plan to continue collaborating with local musical groups to eventually hold a barn dance in the BCCE some warm evening in spring or summer. Stay tuned (pun intended…)! 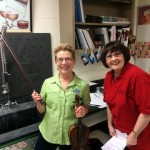 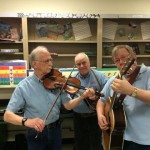 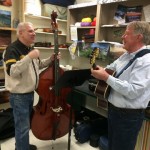 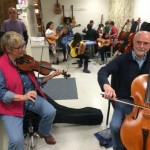 Guitar class finishing up in the back 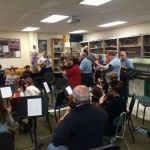 Making room for the students 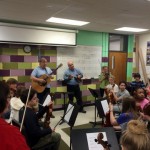 Discussion of a “kick off” 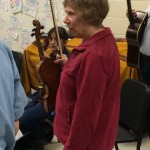 Sara Hartman explaining why they love what they do 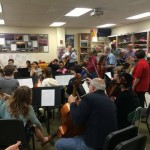 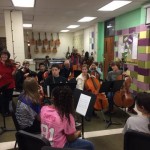 “How do you know how to end the music?” 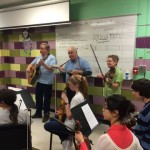 Calling out the next tune… 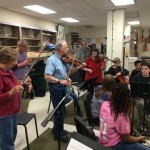 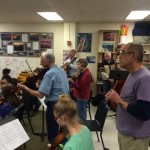 Renegade whistle made it in!