The Commons is a high-tech building. There are many different systems that can be manipulated to allow for the greatest energy efficiency. They are not easy systems to learn and understand. That is where the Living Building class plays an important role. Living Building was an Upper School elective offered in the first two trimesters of this school year. In the beginning, however, there was no building to study, only a construction site. This elective gave ten students the opportunity to learn from others, like the construction project manager, Jim Burm, and Mr. Motsenbocker, Harley’s business manager. They discussed with students what was going to be in the Commons and how they saw those things helping with energy efficiency. For a good part of the first trimester, we learned about things like the HVAC VRF system and the solar chimneys.

The HVAC VRF (heating venting and cooling variant refrigerant flow) system is the heating and cooling mechanism installed in the Commons.  Unlike the separate air conditioning  systems in most houses, the VRF heats and cools by circulating air through air handlers located in each room. The air handlers have tubes through which either hot or cold refrigerant runs. While the air circulates, the refrigerant transfers heat to and from the air. This system is also smaller and more efficient than those installed in most houses. This small scale air conditioning is most often found in places like Japan and Europe where space is limited.  The solar chimneys are glass columns located on either end of the greenhouse that help heat and cool the building. By heating the hot air either out of the building or into a cooler space, the climate is regulated without having to rely heavily on the HVAC system. The warm air and cool air is efficiently circulated inside the well insulated building to maximum effect. 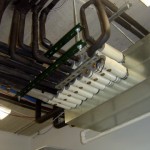 One of the VRF units 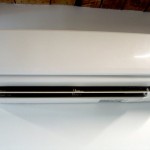 A room vent, delivering the cooled or warmed air 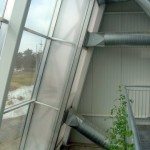 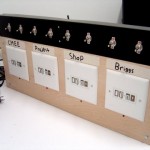 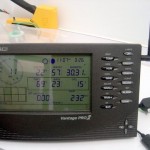 
In the second trimester of the living building class, we focused on troubleshooting problems in all system of the building, and learned more about the building’s energy consumption and production. For example, as a class project, we decided that we wanted to know what circuit breakers were connected to which circuits and room outlets. Understanding the circuitry in the Commons is an important step in learning how to monitor how much energy each system uses on a daily basis. Eventually, all of these parts will help to make informed decisions which will help make the Commons a net-zero building. The class has been instrumental in giving students a voice in making decisions pertaining to the Commons.