Mark Kellogg, Principal Trombone of the Rochester Philharmonic Orchestra and an Associate Professor at the Eastman School of Music spoke with Upper Schoolers about his career path and treated them to a brief performance. It was the inaugural presentation of a speaker series conceived by Student Council President, Seeley Taylor. Mark Kellogg was the first guest in this speaker series designed to introduce Upper School students to Harley parents who work in a wide range of professions. It was a casual format, allowing the interested students to hear about the guest’s personal path and decisions, and to also ask pertinent questions as they consider their career options.

Mark performed Elegy for Mippy by Leonard Bernstein, and the Sarabande from Cello Suite #2 by J.S Bach. After that, he shared a bit about his career path and decision-making process which landed him where he is now professionally. The crux of what Mark shared with the dozen students who were in the audience was that they need to find and follow their passion. Find what makes your life meaningful, since that trumps how much money you make and where you live, in his opinion. Mark admitted that he knew early in his life that he wanted to pursue music as his career. 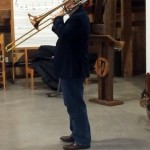 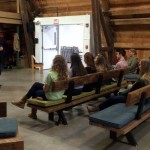 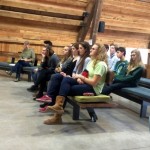 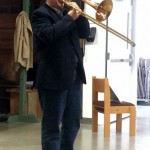 Mark then welcomed his friend and colleague, Danny Zieman (bass) to play with him on a few Ellington tunes. Danny, who just recently graduated from Eastman School of Music, said that he spent more time figuring out what he wanted to do. He said, “Finding passion is good, but also knowing you don’t know what that is yet is ok.” They both agreed that being a good person and using all of the aspects of music to connect with people was a primary goal for them. 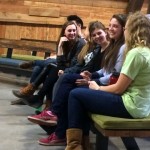 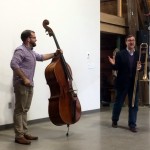 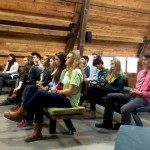 Video of performance of an Ellington standard with Mark and Danny: In a Sentimental Mood

Seeley notes, “It has been my experience that as students, we spend a lot of time thinking and talking about what we want to become professionally, but spend less time talking about how to get there. The speaker series grew out of my desire to expose my classmates to that journey and to allow them to have an honest and open dialogue with people who are passionate about what they do. I think one of the most important lessons I took away from Mr. Kellogg’s talk was his emphasis on cultivating what makes you happy and allowing that to guide your career and ultimately how you determine success.”