The eager students in the Food and Farm Lab class worked last week to harvest the honey from our two resident bee hives, with the expert help of Adriana Lozada and Arthur Rothfuss. The flats which were full of honey and had been capped off with wax were removed (after tricking the bees to inhabit other parts of the hive via a maze…), covered, and taken to the Project Space. The bees are quite methodical about how they make their honey and where they put it. As Adriana and Arthur showed the students, the bees build their honey from the inside to the outside of the flats, in a rainbow-shaped design. 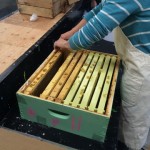 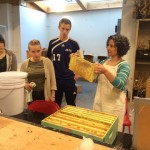 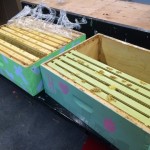 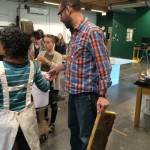 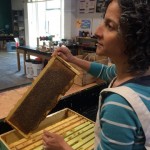 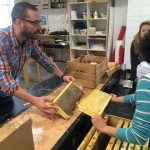 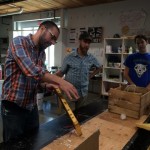 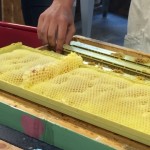 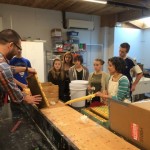 The different colors of the honey (even on one flat) reflect which flowers and pollen were in bloom and available…. In this photo, you can see the dark color of the goldenrod flower pollen over the majority of the flat, but the upper corners are a lighter color because the most recent additions were from a different kind of pollen. 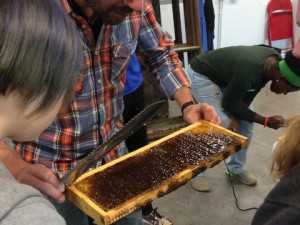 In order to access the honey (which will be spun out in the extractor), the wax cap needed to be removed from one side of the flat. The students heated the knife so that it cut through the wax more easily. The wax, once removed, will be strained, also. Here is video of  cutting off the wax cap. 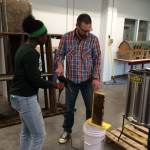 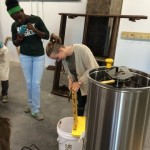 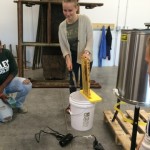 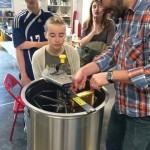 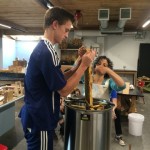 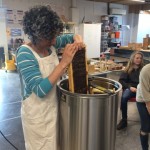 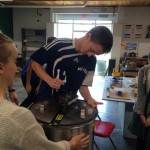 Once the flats were all uncapped, they were placed in the honey extractor and spun quickly to pull the honey out of the honeycomb. Here is a video of the spinning process: Spinning the honey out

The honey, once spun out, is collected in sterilized buckets to be strained and then bottled. We will keep you posted on the process and when the delicious nectar will be available! 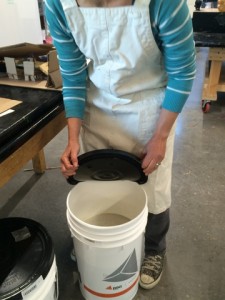