Field Trip to a Master Class at the University of Rochester

The AP Physics students made an all-day trip to The University of Rochester – Department of Physics and Astronomy. The primary purpose was to attend a Master Class and learn about the field of High Energy Particle Physics. There was an opportunity to tour physics labs. World experts explained aspects of particle physics. We analyzed the same data that was used to discover the Higgs boson. We ended the day with a video conference with scientists at Fermi National Accelerator Lab in Batavia, IL.

We arrived at Bausch & Lomb Hall on the River Campus by 8:45 AM. Students had a few minutes to adjust to college life before we got started. 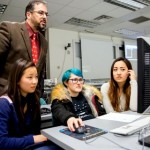 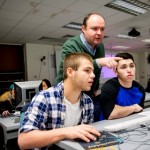 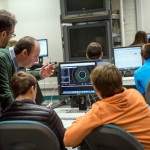 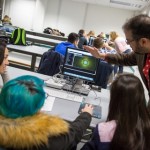 The 2013 Nobel Prize for physics was for the prediction of the Higgs boson which was discovered at the Large Hadron Collider at CERN. You may have heard the media refer to it as “the God particle”.

First we had to learn about the Standard Model of Elementary Particle Physics. All matter in the world around us is made up of particles like quarks (which form protons and neutrons) and electrons. Particles of matter interact with each other by exchanging force particles like photons (light). There are many exotic particles too that we don’t “see” in everyday life.

The AP students at The Harley School learned a considerable amount about the Standard Model and subatomic physics.

Everything that we see is primarily composed of the three particles at the top of the leftmost column. The particles in the fourth column are responsible for the forces: electromagnetism, the strong nuclear force and the weak nuclear force.

In order to study these particles the LHC was built. It is an underground ring with a circumference of 27 km in which protons are accelerated to extremely high energies with speeds very near to the speed of light.

Exotic particles are created in these collisions and detected with massive detectors. We studied “events” that were detected by the CMS detector which is one of four detectors. The image on the left shows the accelerator ring in its underground tunnel. The image on the right shows the 50’ x 50’ x 70’ detector that weighs 12,000 tons. It acts like a 75 megapixel camera that snaps 40 million pictures per second. Ultrafast software throws away all but the most interesting 100 images per second.

We had done some practice working with the software in the days leading up to the event. Students received more training when we arrived. They found that there is no better way to learn than actually doing the job with the help of experts.

Students quickly got busy studying the tracks of exotic particles in the particle tracker software. They were quickly identifying W bosons, Z bosons and Higgs bosons as shown in the events below.

Conferences are sometimes needed to discuss the more interesting events.

Once they had collected data in small groups they combined their data into one large data set. They were able to extract the bound states of charm and bottom quarks, the Z boson and the mass of the Higgs boson.

During the conference call with scientists at the Fermi National Accelerator Lab students were able to ask questions. It was a great introduction to worldwide scientific collaboration.

The owners of various lab facilities were very generous giving tours to students. First we saw a lab where students take classes and get a lot of training in laboratory technique.

One of the lab instructors described all of the equipment that is made available to students in the teaching lab. He also explained that students get their own keys, they are allowed 24-7 access, and they are expected to blow a few power amps, etc., along the way. We saw many labs where world-class research takes place. We also saw a fully equipped machine shop where students can make their own parts. 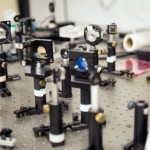 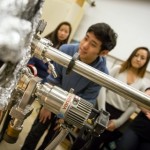 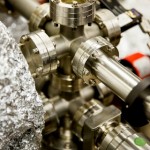 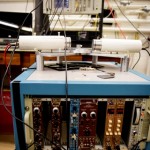 During lunch, students were able to interact with professors, laboratory staff, graduate students and undergraduates. Students were pleased with their meal, but marshmallows make a surprisingly awesome dessert when frozen in liquid nitrogen! There’s nothing as refreshing as a treat that is cooled to −195.79 °C (77 K; −320 °F). You can see your breath in any weather! 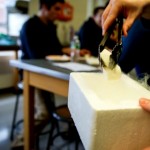 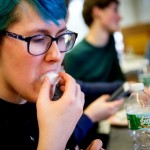 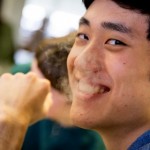 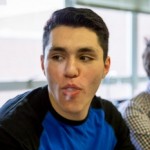