This Common Ground features two teachers who made excellent use of problem-based learning opportunities….one has been ongoing in the 3rd and 4th Grade Project Based Learning class, and the other was a spontaneous inspiration drawn from the previously mentioned project installation in the Gallery. But first, a description of the 3rd and 4th Grade project:

Roxaboxen Project and Installation
At long last, and after considerable time and effort invested in collaborative learning through design thinking, our 3rd and 4th Grade “Roxaboxen” project is complete and on display in the Gallery! What began as an open discovery and expedition into the quaint story of Roxaboxen has since grown and evolved through student initiative and inventiveness. The launch of the project started with group decisions about where to go with this project, then continued with settling on constructing their own communities, exploring facets and needs of various communities (rural, suburban, urban), drafting building permits, meeting an architect and investigating blueprints, dividing into random teams of 3rd with 4th Grade pairs, creating their own floor plans (using math for scale, perimeter, elevation, building constraints), acquiring “found” materials for construction, building their structures, then making their community grid in the Gallery, and finally placing their structures according to their zoning regulations. It’s no wonder this project has taken over two months–but the students were excited and engaged at every organic step along the way.

Kudos to Mrs. Guiffrida for giving the students full ownership over their learning, and just enough guidance to keep them on the right track. The final display will be in the main Gallery until Tuesday afternoon. You are strongly encouraged to stop in and check it out. Mr. Tiffin helped a handful of students record audio narrative about the steps of the process, which were then made accessible through QR codes next to photos of the various stages of the project. The final step of the project (which might be the most important) will be for all students to reflect on their own contribution and evaluate what is missing from the community, and what that might mean for the people who live there. Bravo to all involved! 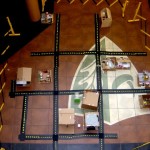 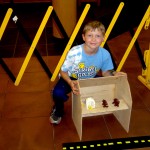 Rural barn at the end of the road 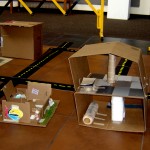 Some suburban structures starting to fill out the neighborhood 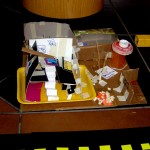 All structures had height and perimeter regulations

All made with reusable materials 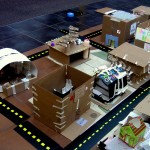 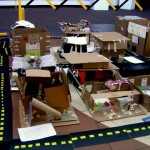 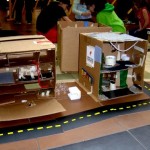 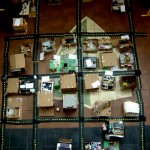 An aerial shot of the final community layout 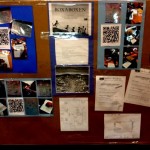 Pictures and audio descriptions of the process with QR codes

Later that day, after the placement of the final buildings, Middle School math instructor, Dan O’Brien, and his 8th Grade math class were seen in the Gallery with long measuring tapes and big paper diagrams of triangles. Here is how he explained the activity:

8th Grade Congruent Triangles Lesson
“We are learning how to prove two triangles are congruent and then using that proof to show that all of their corresponding parts are also congruent.  I surprised the kids by taking them down to the swimming pool in the middle of class.  There, we reenacted a story from Napoleonic times (probably an urban legend).  While moving his army across Europe, Napoleon sent one of his officers ahead to scout out the width of a river they needed to cross.  The resourceful officer, who must have had a wonderful geometry teacher in his past, using only the brim of his hat, imaginary triangles, and the rules of congruency determined the width of the river without getting wet.  When we reenacted it to determine the width of the pool, we were a mere 10cm off!  Sacre bleu!

So, as I was walking in this morning through the Gallery, I was thinking about how this lesson would come out.  I saw the model city and thought I could use that for another demonstration of using congruent triangles.  I told the students that we had to measure the width of the city without touching any part of it or violating its airspace.  We figured out how to create two congruent triangles, measured the corresponding side of the outside triangle to get the measure of the city’s width.  The kids enjoyed it and I got to wear a hat (for the pool activity of course).” 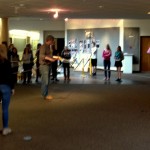 Measuring tapes stretched across the Gallery 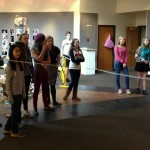 Waiting to crunch the numbers 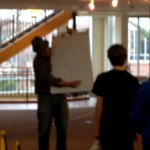 Unfortunately, a blurry shot of Mr. O’Brien (in his hat!) drawing the position of the triangles 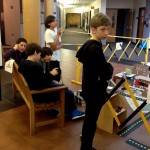 We just love how our teachers and students continually make connections! I am sure these lessons will be long remembered…