In a room designed specifically for town hall meetings, assemblies, and civic purpose, the entire Upper School student body and faculty gathered for the first-ever assembly held in the Briggs Center for Civic Engagement (BCCE). This was an opportunity to gather together to experience the new space and to gain an overall view of the people and programs that will live in the Commons. The assembly began with a short reading from “A History of Harley” which highlighted the important milestones in the school’s growth and evolution, both in purpose and physical plant. The readers were Liam Brennan-Burke, Matt Rittler and Chris Hartman. This was followed by a short promotion for one of the advocacy projects that has grown out of the Rights and Responsibility class. 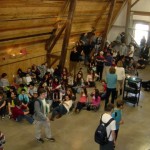 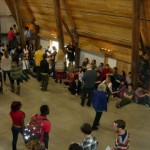 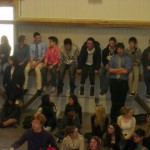 The back wooden supports being well used 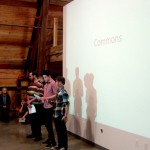 A brief history of Harley 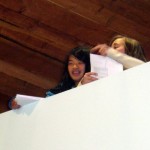 Seth O’Bryan, Commons Coordinator, then gave a thorough and engaging overview of the spaces and systems in the Commons. Ask him how a dog’s paws are similar to how the building’s heat exchange will work…. He shared the past thinking that informed the present structure, and explained what decisions have already been set in motion to set up the work that still needs to be tackled by the students in how to manage the energy and use of the building. Chris Hartman then spoke briefly about the classes which will live on the ground floor of the Commons in the Workshop, the Project Space and the Greenhouse. 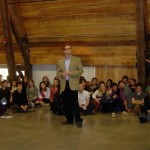 Before the lights dimmed for the power point presentation 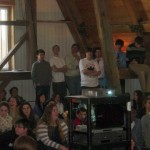 Images from a portable projector for now, but a high-intensity projector is soon to be mounted on the back wall 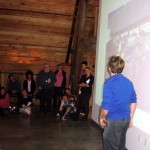 Next up to present was Lyn Parsons, co-chair of the Committee for Civic Engagement. In a fantastic demonstration of proof of concept, she asked the students to participate in a “human barometer” to show where they feel on the “I feel that I can make changes in the world around me” continuum, and then again for “I feel that voting is my duty”. Her point, well made by the students, was that no matter where they fell on the continuum, they still had a response and an obligation to weigh in on important decisions and democratic process. 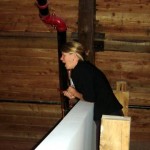 Lyn Parsons in the loft, announcing the topic of the human barometer measure. 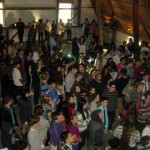 Students grouped according to their response 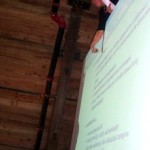 Making a point that an element of being a Harley student is becoming an engaged citizen, as written in the Characteristics of a Harley Graduate (projected on the front wall)

After returning to their class areas in the space, Michael Brennan, Director of the Center for Mindfulness and Empathy Education (CMEE) asked everyone to close their eyes briefly to think about the many hours of work, time, and money that have already been invested in the Commons. He asked for them to gratefully acknowledge those who had given much to create such a beautiful building. He shared a bit about the purpose of the center and then introduced Sariah Cochran and Ben Plotnik, two members of the CMEE student advisory board. 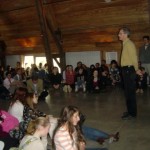 Everyone with eyes closed, finding a place of gratitude 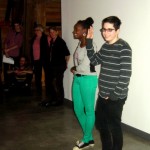 Sariah and Ben sharing about their role with the CMEE


Finally, students from the Living Building class addressed the need for students to understand and engage with the data gathered from the various sustainable systems in the Commons, and what structures already exist to support the community of the Commons. Seeley Taylor and Maelys Lossa spoke specifically about future ways for students to assume leadership and management of the building. For a short 30-minute assembly, much ground was covered, and it was a most appropriate first event to take place in the Commons. 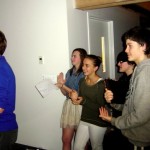 Members of the Living Building class before their presentation