As part of their “Blank Tape” series of concerts, the Institute for Creative Music returned to the Briggs Center for Civic Engagement to share new pieces and community collaboration. The evening started off with the members of the IfCM “collective” performing pieces written by the members. The members of the collective include founding members Chris Teal, drums, and Mike Kaupa, trumpet (who teaches Jazz at Harley), Danny Zieman, bass, and Mike Frederick, guitar. They were joined by local high school junior, vocalist Sharada Shashidhar.

The second half of the concert centered around the Rochester premiere of “Gathering Tomorrow”, written by a third founding member of IfCM, Matthew Golbinsky, in response to the recent events in Ferguson, Missouri. He was able to describe the work and also lead the audience participation from his home in Buenos Aires, Argentina, via Google+ Hangouts. Joining the IfCM collective members for this larger piece were friends of Matthew in Argentina, and Rochester community members Karen Ulmer, flute, Amy Kintner, clarinet, Kyle Stefan, drums, Lochlan Boebel, bass, Ben Fang, guitar, and Arlene Leach, reader. The work uses the poem “Winter Haven” by Bill MacKay as the narrative overlay to the different musical sections, involving the audience as communal readers, as directed by the composer. The piece, as described by the composer, pits a trio of musicians (representing negativity) against the reading audience (representing positivity and love), with the remaining musicians as mediators, as images flash on the screen. It was a fitting concert to hold in the Briggs Center for Civic Engagement–not only for the acoustic properties of the room, but also in the content of the community-building premieres. 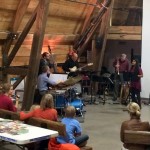 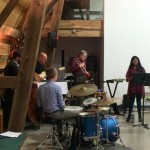 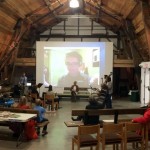 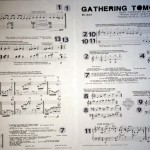 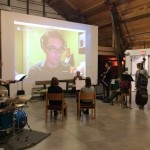 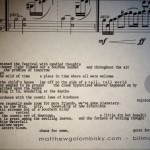 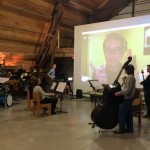 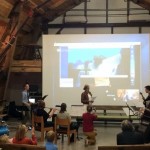 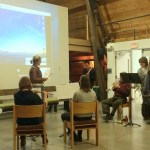 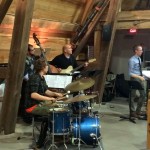 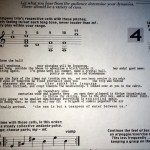 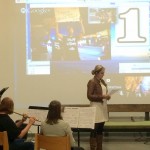 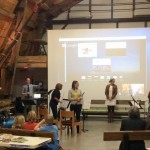