In a way to expand (literally) on their study of DNA, Mrs. Rivers’ seventh graders created larger than life strands of our genetic building blocks.  Deoxyribonucleic acid nucleotides are composed of one of four nitrogen-containing nucleobases (cytosine, guanine, adenine, or thymine) and a  sugar and a phosphate group. The nucleotides are joined to one another in a chain by covalent bonds between the sugar of one nucleotide and the phosphate of the next. The nitrogen bases of the two separate nucleotide strands are bound together (A with T, and C with G) with hydrogen bonds to make double-stranded DNA.  According  to Mrs. Rivers:

“The students build these models to show sugars/phosphates in the sides of the ladder and base pairing rules in the rungs of the ladder. We built small scale models out of licorice and marshmallows in class first. The posters behind it were a math/science cross-curricular project….Dan O’Brien and I merged our classes one day so we saw kids for two blocks. We gave them a genetics/DNA related question. They had to research the info needed, solve the question, and present it in a poster…all using the scientific notation they were learning in math class.” 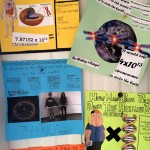 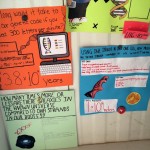 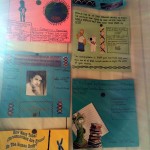 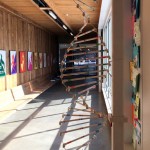